It's almost over! Let's wrap things up.

Written by Benjamin
Updated over a week ago

As mentioned in Part 2, the final recipe asking for a quick reply response from your userbase will inevitably have several tags as the link: {{q1}} and {{q2}} in our case.

Keep in mind that not all links need to be the same. If you're making a trivia game where all questions need to be answered correctly and your user slips up on a question, you can end it right there while allowing correct responses to continue on.

As you know, variables store all answers given in a quick reply. We can take this information around and direct our userbase to another recipe by treating their quick reply as an input.

We're going to create another recipe called red. We're going to touch the User Trigger portion of the recipe builder (which we've neglected so far!)

Add a trigger: in this case, a variable. As you can see, all possible variables and their corresponding responses from this specific chatbot will show up in ItsAlive.io.

In this case, if your user picked Red as an answer in recipe 1 (the recipe that saves their response into the variable q1, then they'll be redirected to this recipe.

Repeat for your second variable. As logic goes, two reds make a red. 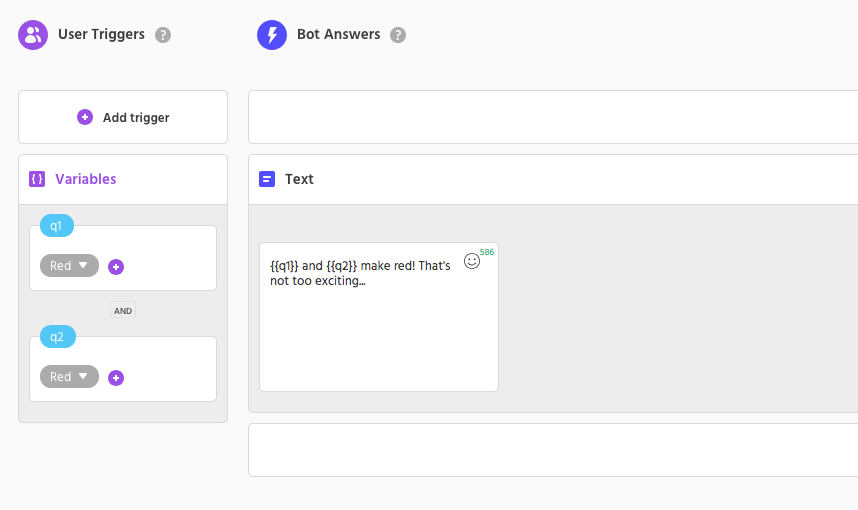 You'll repeat this process for all other combinations: keep in mind that for secondary colors like purple that you'll need to create two separate recipes: the first that has the variable to q1 and q2 set to red and blue (respectively), and the second vice versa (q1 and q2 are blue and red, respectively).

Did this answer your question?